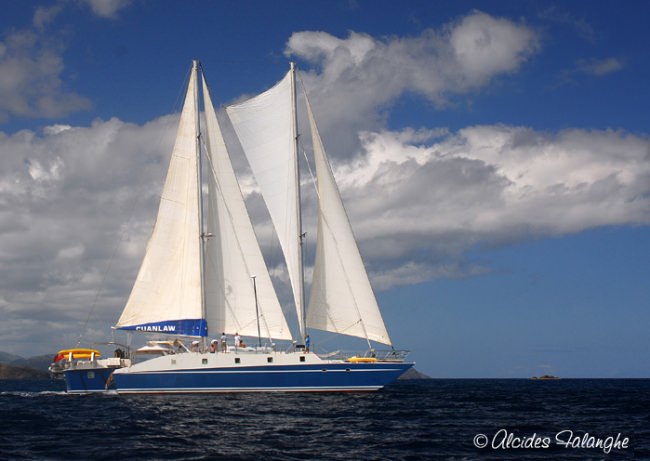 * There are ten double staterooms, each can be set up to suit your needs with a double bed or twins, side by side. Accommodation aboard Cuan Law is spacious and comfortable. You won't find cramped bunk beds aboard Cuan Law and you've got plenty of walking around space.

Please ask about extended and/or "Down Island" trips.

Six nights, seven days accommodation in two person cabins, twin or queen, with private bathroom.
24 hour air conditioning or natural ventilation through hatches and windows.
Three meals per day and hors d'oeuvres and snacks.
All hot and cold drinks including alcoholic drinks and wine with dinner.
Local taxes.
Fuel for diesels, generators and tenders. No fuel surcharge.
Use of all sporting equipment and scuba tanks, air, weights and snorkeling gear except as detailed below.
Instruction in water sports except as detailed below.
Help and guidance from crew including scuba.
Use of tenders, driven by crew at all times.
Full service from the crew.
Wifi
Dockage

Diving equipment except as detailed above. Rates in Website
Nitrox and DPVs. Rates in Website
Diving instruction. Rates in Website
Massage therapy - $100/hr
All expenses before and after stay on vessel.
Transfer from airport, ferry or hotel to and from Cuan Law.
Travel insurance
Gratuities to crew. (suggest 15%)

CAPTAIN
Captain Scott over many years has done everything and every job on the Cuan Law except Chef. We owe him a huge dept of gratitude as he has been the foundation stone of the crew. He has trained up dozens of our crew over the years. Scott started off as steward on board and then, after getting his Divemaster rating, he led many dives in addition to his work as steward. Scott still loves to dive and will certainly do some dives with you whilst on board. He then moved on to Engineer as he had always had a great interest in, and aptitude for, the ship's machinery and equipment. He has fixed numerous problems, installed much new equipment and machinery and done many upgrades. He still likes to mess around below decks playing with machines! After a few years as Engineer and then First Mate, we promoted him to Captain and added the job later of Captain Trainer. Scott has done many, many charters as Captain, has as much knowledge as Owner Duncan, and really understands "The Cuan Law Way". He has a great sense of humor and is very fun-loving, and he runs a well organized and motivated team. A few years ago he married our then Chef, Kellie, whom many of our past guests will remember and future guests will get to meet as she is now back on board. Scott’s sister, Kim, is our Operations Manager.

ENGINEER/MATE
Ariel was born and raised on Tortola and moved to Thailand at the age of 12. Ariel joined us on board the Cuan Law shortly after he returned to the BVI’s in 2017 as steward and is currently very excited as he has decided to embark on training to become our engineer. Already - in just his first year year spent with us on the Cuan Law - Ariel has become a Certified diver and is working on getting his Dive Master. He’s also gained experience with cooking which occasionally helps remind him of his years in Thailand as he still spends some of his time in the galley. In his free time he enjoys skateboarding, surfing and being out on the water with friends. With his deep love for music he also owns a guitar that, unsurprisingly he doesn’t have time to play!

DIVERS
Reka and Sabina
Reka Lukacs is a Hungarian girl from Transylvania, Romania who joined the Cuan Law early in 2018. She began her travels as an au pair in England where she learned English and ever since she got comfortable speaking it she just can’t stop traveling! She lived in Mexico where she was mesmerized by the beauty and magic of the underwater world so she became a diver. After that she continued her journey to Thailand where she spent a lot of time guiding the shark watch trips and got passionate about underwater photography. She got to experience a bit of Australia as well before riding the waves on a rigid inflatable boat to the dive sites of Mozambique. She already enjoys the shore hike/walks around the smaller islands of the BVI and exploring the big rocks at The Baths on Virgin Gorda. She is a fun loving, talkative girl who is all smiles and laughs and ready for games at any time :) 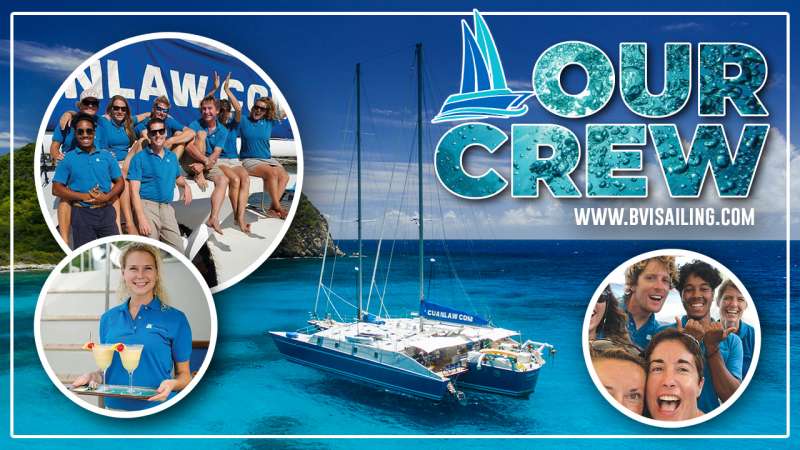