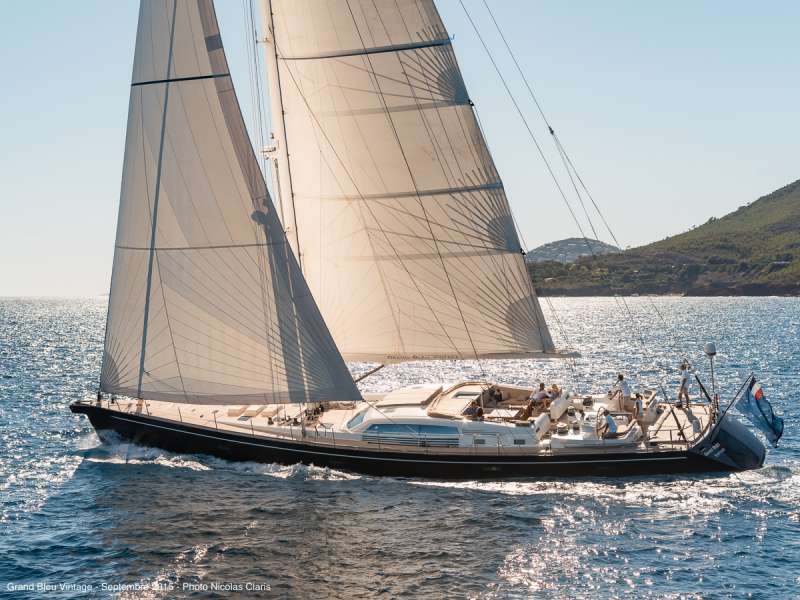 All cabins are with: A/C with private control, plugs, hair dryer.

All rates are for 7 nights, 8 days. Charters of less than 7 nights on request depending on schedule and season (5-night-minimum rate)
For short charters, please use the divide-by-6 rule for figuring short charter premiums. Charters of 6 nights, use 6/7ths (six sevenths) of the weekly rate.

Pascal worked as a sport shop manager for three years before deciding to crew on sail boats such as the 80’ Umatalu, the 75’ Serenité and the Swan 651 See Flo. During his five years of training, he sailed in the Mediterranean, the West Indies, Brazil and took part in several Atlantic crossings. He is now perfectly at home in the charter world on board large sailing yachts.
He also monitored the building of a 75’ sail boat, ‘Kermor’ and stepped on board as Captain for a round the world cruise which took him to all the seas and oceans of the world between 1993 and 2002.
Since then, he has sailed on various boats, such as the Swan 72’ Elysion Blue, the 130’ Globana M, the motor yacht Pegasus, the 82’ Falcon, and Sirius of Man, a Predateur 100, before embarking on Grand Bleu Vintage in February 2007.
In addition to his excellent seamanship and technical skills, Pascal loves water skiing and downhill skiing, he plays golf and enjoys natural history, astronomy and photography.
Quiet and cheerful, Pascal is an attentive and welcoming host. His extensive experience allows him to deal confidently with any situation.

It was perhaps her childhood on an African peninsula that gave Clémence her love of the sea at a young age; she grew up sailing in the Gulf of Guinea, and later she served as hostess and sailor on the seas of the Caribbean, the Mediterranean, and the Atlantic Ocean.
As comfortable on sailboats as luxury motor yachts, her professionalism and good humor will make your stay aboard the Grand Bleu Vintage relaxed and pleasurable.

Guillaume comes from the French Riviera where he discovered his passion for the marine environment at a very young age.
He studied in different military establishments, which taught him discipline and determination.
Passionate about sliding sports, he has followed the waves from the East Coast to the West. During his travels, he extended his passion to fishing, underwater hunting, deep sea apnea diving and yachting.
Guillaume is recognized for his dedication to excellence and his eagerness to learn new techniques and get new skills.