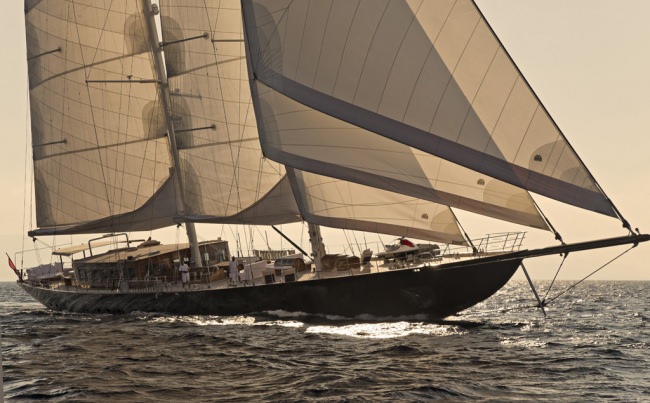 3 Master Cabins
3 Guest Cabins
The interior styling has a classical features and will be executed in clear mahogany wood and white lacquered. All three master cabins has a separate dressing room and specially fitted with Satellite TV, DVD and music system. Every detail will be considered for guests conformity. Other guest 3 cabins are considered as comfortable as owner cabins. The large saloon and deck area give a possibility of excellent charter cruise for guests both on engine and sail cruising with international and capable sailing hardware

Captain Name: Captain, Cahit Burak Korel, 41, was born and raised in Istanbul, sailing optimist dinghies on the Bosphorus from an early age. Burak graduated from the Piri Reis Maritime University and worked from 1999 through to 2007 as a Deck Officer in the maritime industry. From 2007 up until the present, he has worked as a professional captain aboard both private and charter yachts, most recently serving as captain of S/Y DURATION in the south of France. He was captain of REGINA through the summers of 2013 and 2014, during which time he undertook two Atlantic passages aboard the yacht and skippered her during her charter season in Antigua, BVI, the USVI, Trinidad & Tobacco and Aruba. He believes team work is key to successful charters and happy clients and is able to create the right environment for his crew to deliver a high level of service. He has crossed the Atlantic Passages ten times and has over 250,000 nautical miles of experience at the helm in open seas. A personable and easy-going gentleman, Burak enjoys competing in Triathlon, Duathlon and Half Ironman events. He was placed second in the 2015 Half Ironman Turkey Championship. Burak speaks fluent English. He is a non-smoker.

First Mate, Mustafa Uyan, 37, satisfied his childhood desire of working aboard yachts by taking his first deckhand’s position in 1996 at the age of 17. Since that time, Mustafa, who was born in the yachting centre of Bodrum, has been steadily working his way up through the ranks, spending his first 7 years as a deckhand/steward and then a further 5 years as senior deckhand.
In 2008, Mustafa landed his first captain’s position aboard the charter yacht, JULIETTE and in his own words, means to go far with his chosen career! Mustafa is keen to build experience within the yacht charter industry through constantly improving his skills and abilities.
Mustafa was a member of the crew of REGINA that crossed the Atlantic to the Caribbean in 2013/14 and sailed down the South American coastline. He throughly enjoyed this time spent aboard the yacht and after a summer spent aboard the charter yacht, PRIMADONNA, he is pleased to be back aboard REGINA for the coming winter season in the Caribbean. Mustafa enjoys fishing, reading, watching films and traveling.

Chef, Muharrem Kaya, started working in kitchens at the age of 16. In his native Mengen, a town within the Bolu district of Turkey, it is quite the custom for young men to learn the culinary arts and in fact, Bolu is distinguished as being a source of great culinary talent, where Turkey’s best chefs are educated. Muharrem developed his appreciation of the art even further and then took his knowledge overseas, gaining additional experience aboard passenger ships and pleasure craft. As his greatest passion was always the sea,the 45-year-old swapped large commercial kitchens for the compact one-chef galleys of yachts 10 years ago and has never looked back. He is experienced in the preparation of Turkish, Italian and French cuisine and is especially fond of creating delicious skillet dishes. In 2013 and 2014, Muharrem sailed with REGINA to the Caribbean and down the coast of South America, a journey which he was to partly repeat during the winter charter season of 2014 when REGINA spent three months chartering in the Caribbean. Muharrem lists as his hobbies watching films and documentaries, swimming and reading books. He is non-smoker, speaks good English, is married and has a son.

Steward, Emir istekli has extensive experience as a waiter, having begun his career at a restaurant in Istanbul back in 2006, and from there, moving overseas to work onboard the Royal Caribbean Line’s cruise ships between 2007 and 2009.
Returning to the Mediterranean, he commenced working as a crew member aboard the private motor yacht, M/Y DREAMON. He he gained valuable experience in the role of host and soon hopped off this motor yacht and onto the sailing yacht, ROSINANTE, a popular charter vessel which was headed for Croatia at the time. He returned to his homeland for the summer of 2011 and started to work onboard REGINA till end of 2015 summer season. During those 4 years he completed around 450 days charters including two Caribbean Charter Seasons.
Emir’s friendly, professional style of service has been acquired during the course of eight years, during which he has worked exclusively in the field of hospitality. He takes pride in his ability to recognise his guests’ requirements and deliver a prompt service with the utmost care.
Emir has an outgoing personality and is fluent in English. His French and Spanish language skills are both at the beginner/intermediate level. Of his many talents, his lists mixing cocktails as among the best.

Stewardness, Sadice Akkaya was born in Bodrum in 1991. She graduated from Galatasaray Maritime University and has been working in the yachting industry for the past 7 years. In her role aboard REGINA, the effervescent Sacide has a chance to really shine. In her spare time, she enjoys reading, swimming and dancing. She loves beach rugby. Sadice is very patient with children and enjoys their company. She has been with REGINA for two years.

Engineer, Murat Ipek was born in Izmir in 1980 and while growing up, was forever fascinated with the workings of all things mechanical. He chose to concentrate on the maritime sector, launching into an engineering career aboard cargo ships, only to find himself working aboard a casino cruise ship for a year. Eventually, he joined a crew working on board charter gulets based in Bodrum, where his duties continued on into the wintertime maintenance of each of the yachts. Murat has been with REGINA since 2011 and is a well-experienced and reliable member of the crew. His interests include fishing, diving, building with his hands and playing backgammon.

Senior Deckhand, Coskun Pehlivan is 25 years of age. He was born and grew up in Bodrum, where he finished high school at the local Maritime Vocational College. With this his third year aboard REGINA, Coskun continues to gain experience and log those all-important sea miles — his most recent trip to the Caribbean for the winter charter season giving him his first Atlantic crossing and qualifying him to sit for his captain’s licence, which he can now proudly produce! Coskun also intends to improve his English language skills — greatly assisted by a charter season in the Caribbean! — and adds the acquisition of a foreign language to his list of interests, among which include football and music.

Senior Deckhand, Safak Can Senol is 24 years old, and single. He has more than 6 years’ experience working on board yachts. His current position is that of deckhand… and he adds that he loves sailing. In the past few years, Safak has taken part in countless sailing regattas off the coasts of France, Spain and Croatia. Safak was once an instructor at the Bodrum Sailing School, where he taught trainees how to start their maritime careers after finishing school. He enjoys swimming, diving and fishing. He loves reading, especially about historic ships. Safak speaks English.