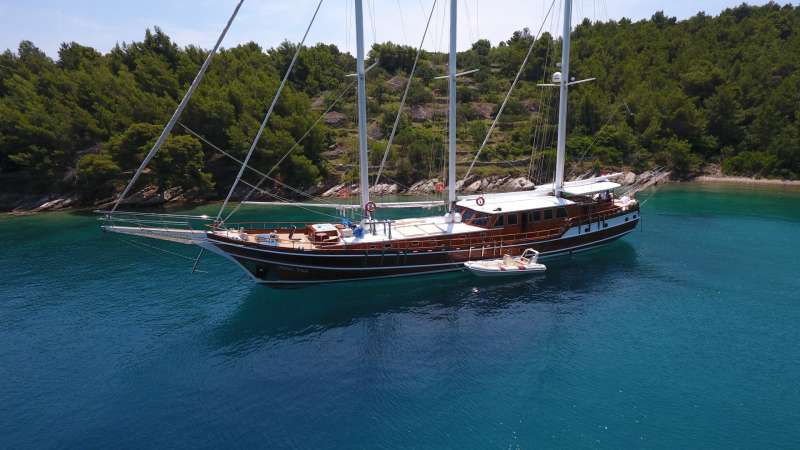 The weekly charter price include:
A week rental with five crew members
Fuel for the yacht and generator work for approximately 4 hours per day
24/7 Air-conditioning, Complete linen and towels, including beach towels

Obligatory Extras:
Half board – includes full breakfast and lunch at Euros 420 per person per week (an extra meal can be arranged during the week at Euros 35 per person)

Extras:
Full Board (optional) – includes breakfast, lunch and dinner at Euros 600 per person per week
Beverages according to an on board price list
Fuel for water sports
Marina fees and port taxes
Land transfers
National park fees
Crew gratuities

Children age 0-2 free of charge, children age 2-10 have 50% discount of a board arrangement.

Captain Name: NIKO - Captain
Niko was born in 1977 in Split. He comes from a family of sailors and has been sailing the Adriatic ever since he was a child. He knows the area like a back of his hand.
He has a degree in Kinesiology, but soon after university, he joined the company and one of their first gulets. This was in 2001 and he is still with the same company. Since then, Niko has worked his way up in the ranks and is now the captain of Dolce Vita. Niko has been captain on Dolce Vita for the last four years.

MARKO - Chef
‘All those years of charters and the time spent on the sea allow me to offer the guests the most fantastic and authentic experience. And for me, seeing people at their most relaxed and happy is a big reward.’

Born in 1984 and has been working as a chef with the same group for 13 years. Marko has been on Dolce Vita for the last 4 years.

‘I fell in love with cooking before the age of 10! I knew then that I would be studying to become a chef which is what I did at college in Slavonski Brod (contrinetal Croatia). After school, I joined the boats at sea (southern Croatia). I have always been inspired by the sea food and working on yachts has allowed me to make the most of it. I cook with passion and great confidence.’

Marko speaks fluent English, he is very creative, communicative and loves his job