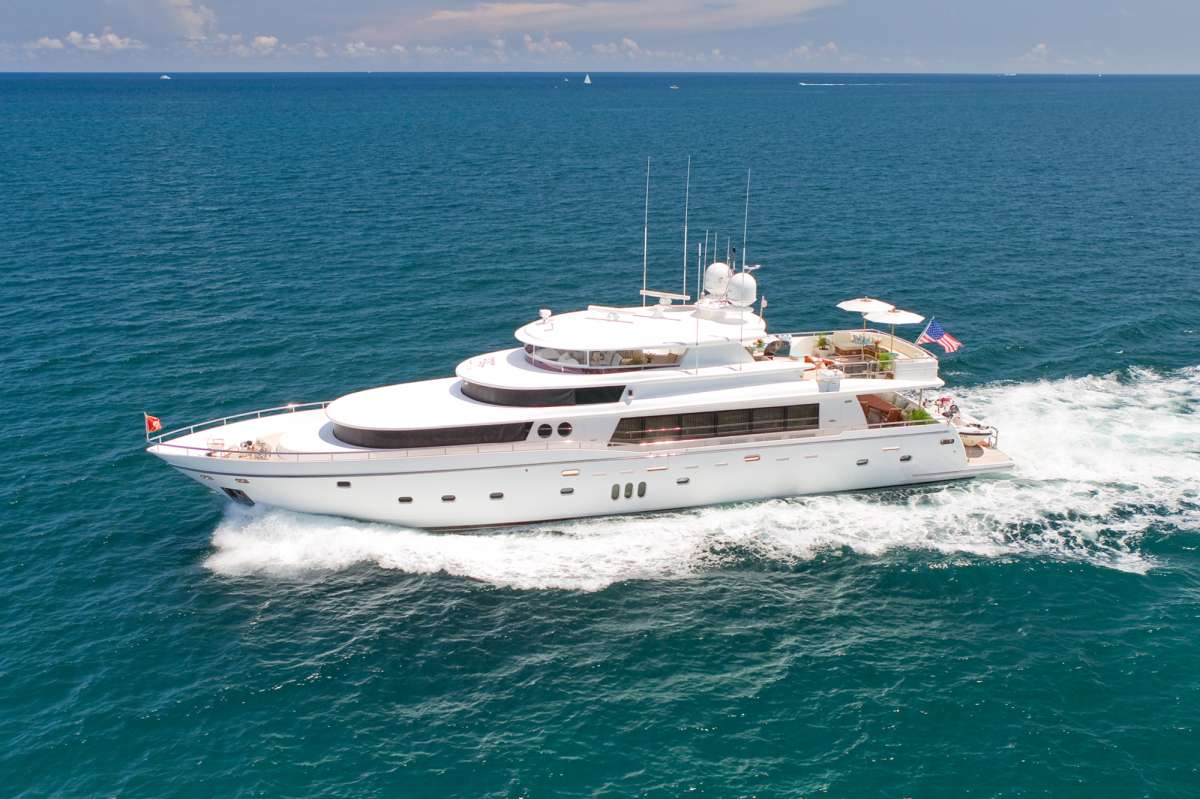 Each guest stateroom has a TV with DVD and individual satellite TV receiver.

Charters are limited to four staterooms total.
DIAMOND GIRL is fully air conditioned through out.
Crew has a separate head and shower.

Tim Smith was born in Iowa and raised in North Dakota where there is far more land than water. His summers were spent onboard his family’s sail boat on northern lakes and rivers; sailing, fishing and swimming. He attended the University of North Dakota and at twenty took a two year break from school and moved to the Virgin Islands. Sailing almost daily on the charter sail vessel VANDOR, and trying and learning as much as he could about boats and oceans, he began what has become his career. After returning to North Dakota and completing college, he immediately returned to boating and has not looked back.

In 1997, Tim refit and sailed his own 1963, 35’ classic sloop ANAKENA from New Orleans, Louisiana to Puerto Rico. He has worked on commercial, private and charter vessels ranging from 29’ to 142’ including two American Sail Training Association (ASTA) Tall Ships. He has experience running vessels in the Caribbean and Mediterranean Seas, the Gulf of Mexico, the Bahamas, in addition to the east Coast of the United States from Florida to New England. Tim currently holds a United States Coast Guard 1600 Ton Master License with Ocean Endorsement.

When not working, you can find Tim in Puerto Rico with his fiancee Denise, their son Christian Aubrey, and their two dogs Bella and Blanca.

Tim looks forward to having you aboard the beautiful motor yacht, DIAMOND GIRL, introducing you to one of the best crews in the business, and doing his part to ensure a safe and wonderful vacation for you and your family.

Brenden is a native Floridian born and raised in Stuart. Famous for sport fishing and its unique waterways, the small fishing town has shaped him into the man he is today. Most weekends were spent with his father building wooden boats in the backyard, pursuing game fish, or surfing at the beach with the family. After graduating high school in 2010, Brenden attended the University of North Florida, however realized being on the water and boats is his true passion.

After returning to his hometown, Brenden started working as a mate for local charter captains at nearby marinas. In 2014, he began his first full time crew position as first mate on board "Layla," a 72ft Jim Smith Sportfishing yacht, chasing summertime blue marlin and Bahamian wahoo in the winter. Since then he has continued to primarily mate in the Caribbean, traveling as far south as St. Kitts and Nevis. His greatest accomplishments have been earning "Layla" a 3rd place podium in the Great Marlin Race, and completing his PADI open water dive certification in St. Maarten along with certified underwater use of military grade SSB communication. Three words which describe Brenden are vigilant, enthusiastic, and dedicated. Currently he is finalizing his USCG Masters 100-ton license, and is working towards becoming full time yacht captain.

Born and raised in Santa Barbara, California, Jason Avakian began cooking by earning a degree from The California Culinary Academy in 1997. He followed by training under celebrity Chef Bradley Ogden at “One Market” in San Francisco.

In 1998 Jason moved to the Caribbean to pursue his dream career as a Yacht Chef. He specializes in Asian, Mexican, French and Italian cuisines and greatly enjoys infusing them with his California fresh style.

When not working aboard Chef Jason’s down time is spent surfing, spear fishing and playing with his kids on the beach at home in the US Virgin Islands.

Dani was born and raised in Minneapolis, Minnesota and despite having grown up in the the snow, she has always loved the ocean. Dani joined the yachting industry after completing her Bachelor’s Degree in Graphic Design in the warm state of Florida!

Dani is very passionate about her job, loves to meet new people and grateful for the exciting adventures it brings. In her spare time she likes to spend time with her bulldog Brutus, watching the Cubs win another World Series and loves to travel to destinations unknown. She takes great care in ensuring that her guests have a sensational, creative and carefree experience while onboard M/Y Diamond Girl.