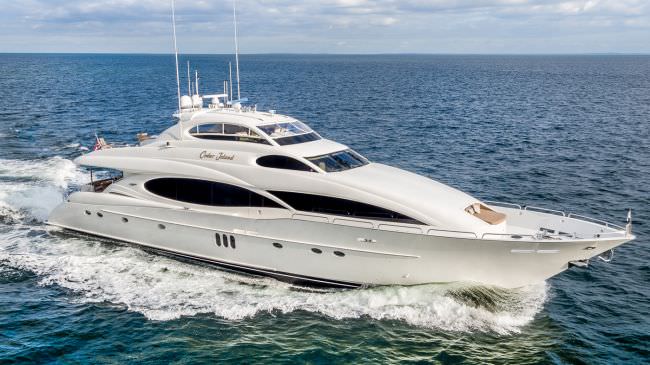 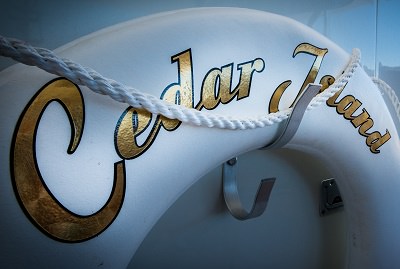 Cedar Island comfortably sleeps eight in an exceptional four stateroom layout that features an exquisite master suite and three VIP suites. The master has an ADJOINING study which may be used as an additional cabin. Crew quarters are located in aft and accommodate four. 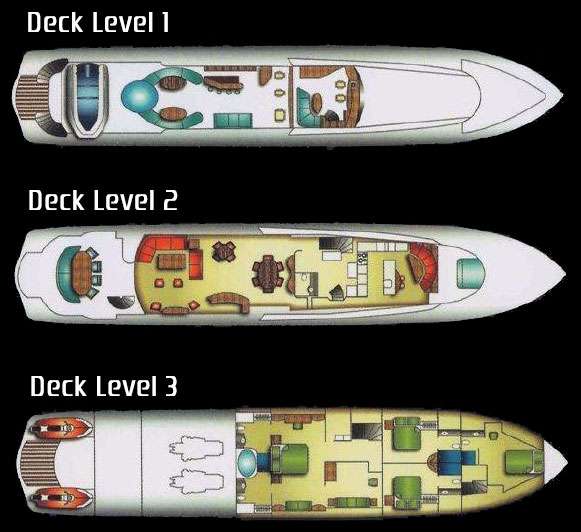 Capt Brent BIO:
Brent's love for the sea started at a very early age as a young sailor racing sailboats at the neighborhood yacht club in Miami, Florida.

His grandfather was a Miami restauranteur and avid fisherman in the Florida Keys and and passed his skills on to Brent. As the years passed and Brent was growing up he always enjoyed working and hanging around shipyards and marinas cleaning boats and learning about the trade. His grandmother was a yacht broker and her fleet always needed maintenance, washing down, polishing, varnishing and fueling. Eventually he started docking, fueling and moving boats around the marina.

His father was also a restauranteur as well as a captain and taught him the skills to run a boat. From there he was to sail around the world on a 45 foot ketch. It was here that Brent began mastering the fundamental of seamanship and navigation. He was to realize the special demands of the sea, cruising, outfitting and maintaining yachts

After a year of great experiences and lessons exploring charted and uncharted waters of the Bahamas, Virgin Islands, Leeward and Windward Islands of the Caribbean in and out of ports and anchorages, the trip abruptly came to an end. He was to come home and go to college and help out the family business, where he became a noted and very successful gourmet chef and restaurateur who's training took him all over North America and Europe. His life as a captain at sea would have to take a second place for a time.

He kept his skills honed thru the next years by owning and bareboat chartering power and sailing vessels in the 40-50 foot range. Then in late 2001 Brent was to put his interest for the sea back in first place, he retired from the restaurant business and has reestablished himself as a captain in the yachting industry. He tested and received the official 200 ton MCA/RYA Yachtmaster license for all oceans with a power driven craft endorsement and USCG 200 ton Master Merchant Marine Officer with sailing and assisted towing endorsements and STCW 95. He is a Certified Diver and has logged many thousands of nautical miles over the East Coast Of the United States, Bahamas, Caribbean, Atlantic and Pacific oceans.

Today Brent is the captain on Cedar Island and maintaining her to the highest standards, while cruising the oceans finding great friends, quaint ports
and anchorages.


Marlando Forrester - First Mate
Marlando is a native of Clarendon, Jamaica where he grew up on the beautiful beaches and spent much of his leisure time in the water fishing, diving and enjoying the aquatics. He is well traveled, spending time in the Caribbean, Europe and throughout the Americas.
Known for his overall handy-man work, Marlando offers a variety of services and experience as First Mate. He is mechanically inclined and capable of handling various tasks on-board, below deck and underwater. He maintains the vessel through waxing, polishing, refurbishing, varnishing, teak repair and some electrical and plumbing as well. He is quite the exceptional cook, capable of preparing delicious Island cuisine and some Italian and American dishes as well. He is a non-smoker and a non-drinker and able to assess situations in an expedient and rational manner. Marlando enjoys fishing and is excited to assist throughout your time with us

Mariana Schilling Jefimove - Chief Stew
Born and raised in Estonia, Mariana’s love of the water and travel combined with her guest/client relationships and extensive experience in the service industry landed her into yachting. Been living in England, Asia and USA she has acquired wide international approach to customer service and relations.
She enjoys all the organizational aspects of job and prides herself on providing guests with an excellent level of service. She is expert at adapting to anybody own personal style to make everybody’s stay onboard memorable.

Chef: – a competent Crew Member will be selected and hired by the Captain as appropriate for the Charter Party