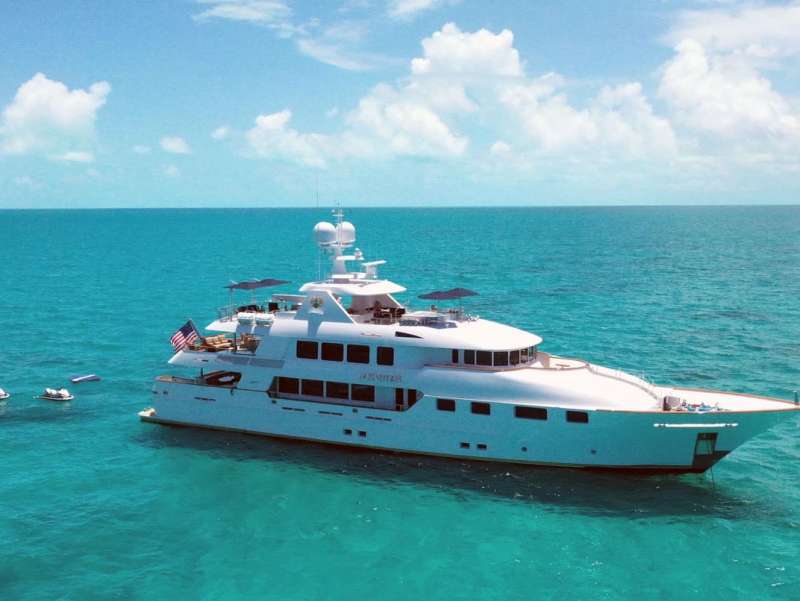 AQUASITION accommodates up to 10 guests in 5 staterooms. On Deck King master with His and Hers bath. The four guest cabins are below amidship all with en suite baths. Three king guest cabins and one twin guest cabin.

Captain Name: CAPTAIN: Andrew M. Lasek
Andrew was born in New London, Connecticut and grew up living aboard his parents’ boat on the waters in and around the Eastern Long Island Sound. A true “hawsepiper,” Andrew’s journey to the wheelhouse is a veritable testament to his dedication and passion for all things maritime. After graduating New Canaan High School, Andrew took a job as deckhand aboard a 180' Feadship where he would spend the next six years mastering all aspects of yachting under the watchful eye of his mentor and now close friend Captain Jim Holman, a distinguished veteran in the industry. Captain Holman took Andrew under his wing and afforded him every opportunity to learn from his lifelong experience on the sea. In the spring of 2017, Andrew’s training came to fruition and he took the final steps to completing the remaining Coast Guard license. It didn’t take long for industry insiders to take notice. Andrew now sits proudly at the helm of Aquasition, a vessel on which he has over two years of experience. Captain Andrew is delighted to have you aboard M/V Aquasition and hopes that you have a most memorable experience.

1ST OFFICER: Samuel Higham
Samuel was born and raised in the small surf town of Gisborne on the east coast of New Zealand's North Island. His passion for the ocean started young with surf lifesaving and surfing. After traveling around Europe and being introduced to the yachting industry and the travel-while-you-work lifestyle, he headed to the US to begin his career. Since his move to the US, he has enjoyed years of exploring what the US east coast and Bahamas have to offer. He has since married and is expecting his first child at the end of 2019. Samuel enjoys bringing a positive energy to the work environment and strives to assure that everyone has a fantastic time whilst on board.

CHIEF STEWARDESS: Megan Shawner
Megan grew up in Jensen Beach, a small beach community in South Florida. Her love affair with the ocean started at a young age because she was always out on the boat fishing, snorkeling, and enjoying water sports with her younger brother. She has a passion for helping others and pursued a degree in nursing until she was exposed to the Yachting Industry in 2012 when she moved to Fort Lauderdale. She is a bubbly, approachable yet professional Chief Stewardess. She enjoys being creative, making her guests laugh, creating a warm and fun environment on Motor Yacht Aquasition, and creating an unforgettable experience for each and every one of her guests that come on board. Megan has traveled most of the beautiful Caribbean, all of the East Coast of the United States, all the way up north to Canada and throughout the Great Lakes. She has also traveled South East Asia where she obtained her 400hr Yoga Teacher Certification. Megan is passionate about her job and is so grateful to combine her love of traveling, the ocean, and caring for others. She is looking forward to welcoming you on board with her big smile and positive attitude!

SECOND STEWARDESS: Paige Armstrong
Paige grew up in Fort Lauderdale, Florida with a family who enjoys spending time on their boat and traveling the world. After studying Editing and Writing in Media at Florida State University, she decided to become a yacht stewardess in 2018. She has successfully completed two seasons in the Caribbean and Mediterranean, insisting that the South of France is her favorite spot. She continues to work on her area of interest, which is graphic design, with hopes of starting her own company in the future. Paige loves to keep the guests’ spirits high and worries low while on board motor yacht Aquasition.

DECKHAND: Parker Hudman
Parker originates from the west Texas town of Abilene. He grew up on a family cattle farm far from the oceans. After graduating from high school and two years of community college the call of the sea struck him. Together with a friend they hung up their spurs and left the plains of West Texas bound for Ft. Lauderdale. Parker has been yachting for two years now and continues to grow and learn. He brings youthful energy to our team.

ENGINEER: Bill Tedcastle
Bill grew up in south Florida, at the age of 19 he joined the U.S. Coast Guard where he was enlisted for 5 years. He served on a buoy tender in the Chesapeake Bay and then a search and rescue station in Fort Lauderdale FL. Bill entered yachting in 2000, while sailing the Caribbean, Mediterranean, Northern Europe, Pacific North West and other far off places he has worked his way up the ranks to Chief Engineer and with his can do attitude is dedicated to keeping Aquasition in top mechanical condition.