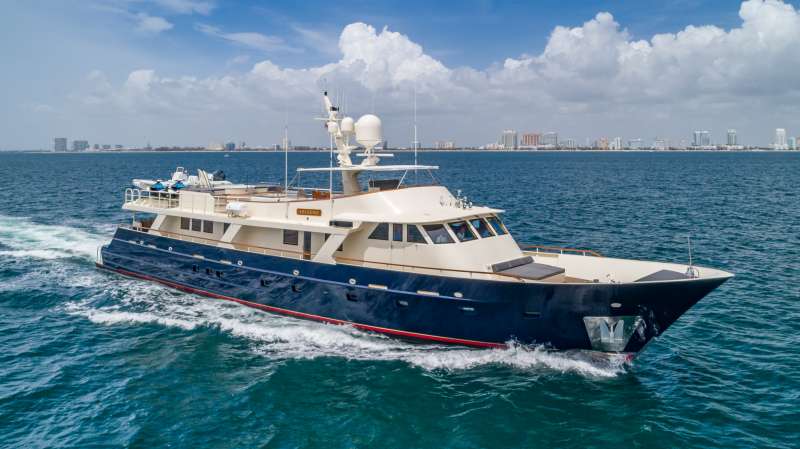 4% Bahamas Tax
Local Tax Where Applicable
High Rate Applies for Christmas and New Year's Charters
10-day Minimum for the Holidays unless booked December 19-26 or December 28-January 4 to allow for two full weeks over the Holidays.

Captain Tom grew up in Florida with a love of the sea. He is an avid fisherman, scuba diver and surfer. Tom was a dive instructor in the Florida Keys in the 80’s which is how he gained an interest in becoming a skipper. He ran dive boats, commercial fishing vessels and then became a fishing guide. He started in the yachting industry in 2001. Tom has spent many years sailing in New England, Bahamas and Caribbean islands sharing his knowledge and passion for the ocean with yachters of all ages. He enjoys boating with his family in the Indian River Lagoon near Sebastian, Florida in his spare time.

Alexei is from coastal city called Mar del Plata, state of Buenos Aires, Argentina. He has worked in the maritime industry with over fourteen years and now brings this experience to ARIADNE. He comes from a seafarer’s family background and started his career as a deckhand, later joining the maritime Academy to achieve his Officer of Watch (OOW) and Maritime transportation degree. After graduating, he worked his way up starting as a Deck Cadet, getting involved in different types of commercial ships to finally achieve his current position as a First Mate. Alexei's hobbies include fishing, snorkeling, swimming, and jet skiing among other outdoor activities.

A Newport, RI native, Chef Drew has always had a deep passion for boating and the ocean. After seventeen years honing his skills throughout New England, he has developed a cooking style that is as eclectic and vibrant as the seaside towns that dot the coastline. Naturally, he thrives working with all things that come from the sea. All about big, clean, and simple flavors, Chef Drew relishes in infusing traditional classics with a touch of modernist techniques.

Tracey is a former financial manager who moonlighted as a waitress and bartender to pay for her studies towards an accounting degree. Eventually, she gave it all up to pursue her passion in the service industry, in particular in yachting. In the last 4 years she has worked as a Junior, Second, Sole and Chief Stewardess on both sailing and motor yachts of various sizes.

Kay-Leigh grew up in South Africa in the busy city of Johannesburg. She joined the yachting industry after completing her BCOM Marketing degree. She enjoys playing different sports and lives an active lifestyle driven by adventure and travel. Her positive outlook on life is reflected by the perpetual smile on her face and her earnest desire to interact with guests.

Regardt “Redge” Booysen is born in Middleburg, South Africa, and grew up in the coastal area of KwaZulu-Natal; he has worked in the Hospitality industry with over thirteen years of experience, serving the Prime Minister of Japan, to name one. Redge has worked with professional photographers on numerous magazine covers, and he also worked in the Architectural industry before joining the Yachting industry. Redge has a passion for Photo/Videography, diving, and exploring the beautiful unbeaten path.