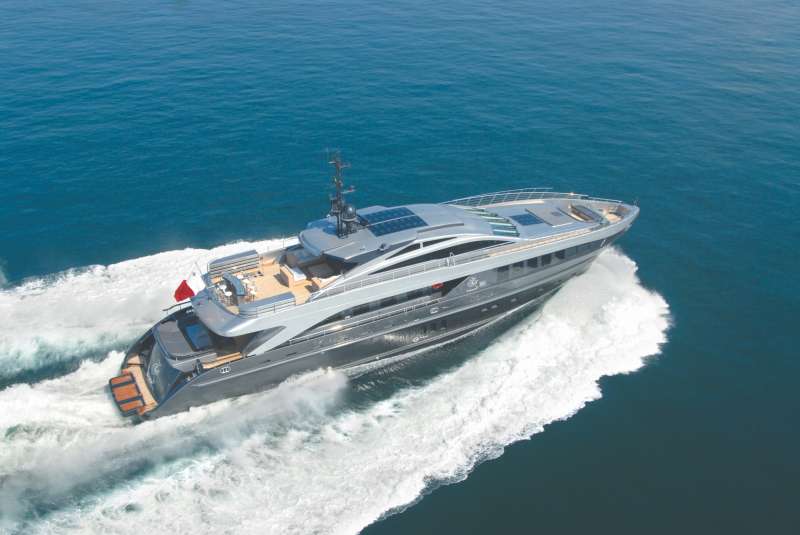 Bilgin motor yacht RL NOOR can accommodate up to 8 guests in four cabins including the full-beam Owner’s suite on the main deck and a VIP, and two double Guest cabins on the lower deck. Her Owner’s suite boasts 2 beds, a seating area, desk, and en suite with tub, shower, sauna, and steam room.

Captain Name: CAPTAIN DAVID SULLIVAN
David, 53 years old, is from Southland, New Zealand but when not at sea resides in Bucharest, Romania. His background is in aviation and boat building and joined as Master of the RL NOOR in May of 2018.
David has now been at sea on luxury yachts for 15 years and holds an MCA Master 500gt and Chief Mate 3000gt certificate. He has extensive experience cruising in all of the Mediterranean including the Aegean and Ionian Seas. He has also sailed in the Pacific and Atlantic Oceans, the Caribbean and North Seas. David speaks English, Romanian and French. His interests are aviation, skiing, motorsport and fitness. His experience, knowledge and skill will ensure your time on-board the RL NOOR is safe and enjoyable.

CHIEF OFFICER OLÇAY AKSU
Olçay is 40 years old and was born in Rize, on the Black Sea coast of Turkey. He has a passion for the sea and has been working on yachts for the past 18 years. He has cruised the Red, Adriatic, Aegean and Mediterranean Seas. His yachting experience includes cruising the French, Italian and Egyptian Riviera, Croatia, Turkey and the Greek Islands. Olçay was a captain on a private 82-foot Arneson drive Sunseeker for 11 years before he joined the RL NOOR as Chief Officer in October of 2017. Olçay is also a car enthusiast, enjoys watersports and is keen to welcome you on board.

CHIEF ENGINEER UĞUR BÜYÜKOĞLU
Uğur, 32 , was born in Arhavi in the Black Sea region of Turkey. Uğur has been working as an Engineer and Chief Engineer on cargo vessels and luxury yachts since 2005. He joined the RL NOOR as Chief Engineer in April of 2018. He is a dedicated marine professional with extensive experience in repairing and maintaining all maritime mechanical and electrical systems. As well as being very proficient on water skis, Uğur enjoys traveling, diving, fishing, sailing and tennis.

CHIEF STEWARDESS JEANNE GRENIEN
Jeanne, 35, was born in the Southern Philippines and landed on an administrative job right after receiving her BSC in Agricultural Economics. She was headed for her first managerial position in the Philippines when an opportunity to work abroad in the yachting industry arose. Eager to see the world and travel, Jeanne has never looked back, making yachting her passion and career. With over 9 years of luxury yachting experience cruising the Mediterranean and Black Sea Jeanne also managed to complete the required academic units for her MBA. Jeanne speaks Turkish in addition to English and Filipino. When not working, studying or learning a new foreign language, Jeanne loves reading, water sports and nature trekking.

STEW/DECK DMYTRO NAKONECHNYI
Dmytro, 27, was born in the Ukraine. He received his Master of Law and then worked in the hospitality industry for 5 years in restaurants and five-star hotels. Dymtro then spent seven months as a bartender onboard the 293-meter MSC Ocean Liner Poesia in South America and fell in love with the sea. Dmytro speaks Ukranian, Russian and English. This will be his first season onboard the RL NOOR as a Steward/Deckhand. In his spare time Dmytro enjoys cooking, playing the guitar, singing, cycling, swimming and running.