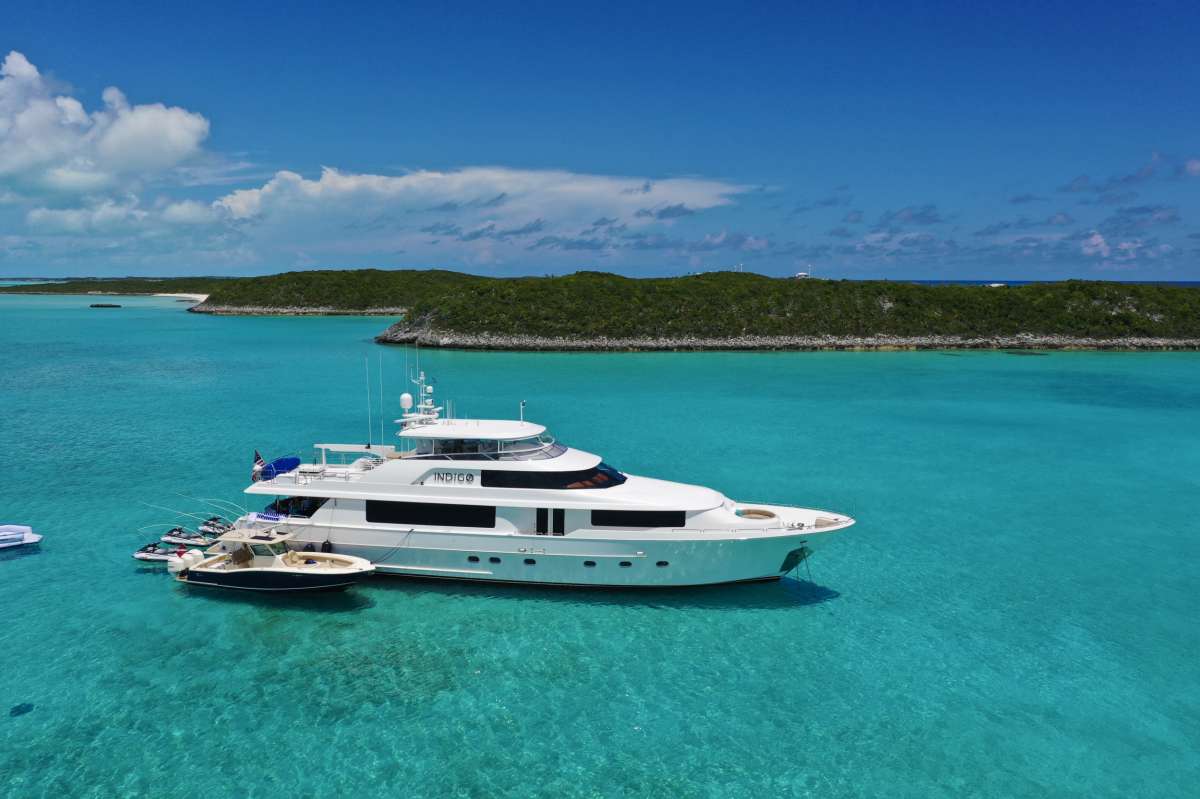 Captain Name: CAPTAIN - Conrad Pool
Captain Conrad is originally from beautiful Cape Town South Africa, known for breathtaking views of Table Mountain and the Kirstenbosch National Botanical Gardens. Captain Conrad loves to travel and had always wanted to explore America. In 2000 he traveled to South Dakota and then made his way to the sunshine state, beautiful south Florida. His love of adventure, traveling, and exploring new places led him into yachting. He has obtained his 500 ton captains license and has worked on vessels that range from 280ft to our beautiful 112ft Westport, M/Y Indigo. While working in the yachting industry Captain Conrad met his lovely wife who has been a chef and chief stewardess in yachting and is currently aboard a 165ft vessel. Captain Conrad takes pride in any vessel he captains and loves giving amazing guest experiences with beautiful anchorages and fun excursions. When Captain Conrad is not traveling around the world by boat, he enjoys fishing and sports. He has a passion for rugby, cricket, and riding his motorcycles. Don’t let Captain Conrads calm demeanor fool you, he is a adrenal junky at heart, if not on the water you could also find him skydiving, racing motorcycles on the track with friends or cage diving with great white sharks in South Africa.

MATE - First Mate – Owen (Bo) Brennen
Bo was born in New Orleans and lived there until hurricane Katrina forced his family to move to Destin Florida. Bo, with his two brothers got to live and play in and around the water all day, as they lived on their family boat. The family tender was the way to get around and soon he found his love for the water. His family moved to Gulf Port, Mississippi. During his high school years, Bo played on the football and baseball teams. Bo went on to play quarterback at Ole Miss. But injuries put stop to this love for sport. Bo is enthusiastic, hardworking and enjoys a challenge. He moved to Fort Lauderdale to start his yachting career and has found a new passion to steer his next course. Bo looks forward to serving you on board INDIGO.

STEWARDESS- Arianna Clark
Arianna is originally from a charming beach town in beautiful West Michigan where dunes sprawl and line the lakeshore of pure Lake Michigan. Since childhood she spent her summers boating and swimming, thus sprouting her love for the outdoors and water sports. She is also an avid skier and has conquered mountains across the U.S. With an eager streak for adventure and an overwhelming sense of wanderlust, Arianna set sail for the seas, leaving her sommelier career behind, and followed her course in yachting. As a live music enthusiast, you will most likely find Ari exploring new locations, cultures and restaurants. Her outgoing personality, creativity, and wine expertise makes Arianna a valuable addition to our crew. Rest assured that guests will have an unforgettable stay with this bubbly 30 yr old tending to their yachting needs. You can count on Arianna for a warm welcome, a big smile, and a lending ear.

CHEF - Tristn Walerko
Tristn is from the home of the Notre Dame Fighting Irish, South Bend Indiana, along the St. Joseph River. He has a passion for family, food and Notre Dame football. His love for cooking began at a young age as he was always in the kitchen with his family and Notre Dame football on the TV. Tristn vividly recalls being able to trim a tenderloin at the tender age of 12, thus laying the foundation for him to pursue a career as an Executive Chef by the age of 25 in Boca Grande, FL. As a child he also grew up sailing and raced in the Chicago Mac several times. In 2012 the sea beckoned and led Tristn into his yachting career. He enjoys preparing what he calls “boat to table” cuisine-- he freshest seafood caught right from the ocean below. When Tristn isn’t plating up delicious bites he enjoys sailing, waterskiing, riding his Harley Davidson and traveling. Chef Tristn is excited for you to taste his creations and sit back and relax with delicious food and a great cocktail.