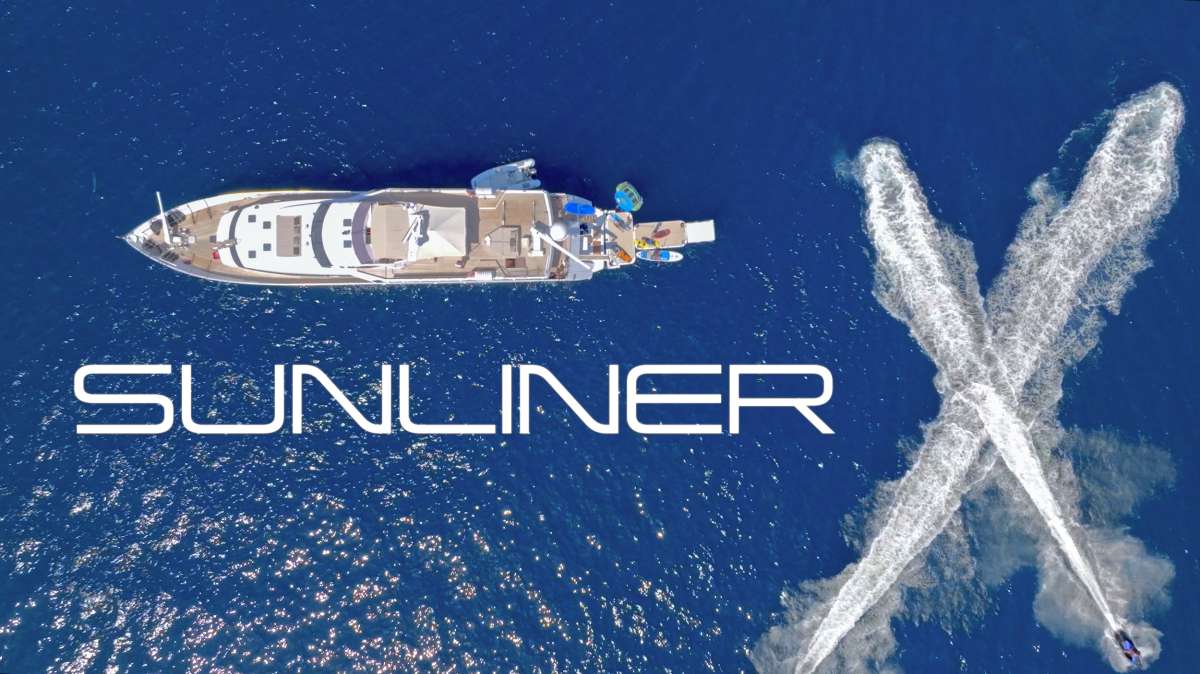 3 double cabins and 1 convertible
All guest cabins are on lower deck:
Master cabin with king size bed: TV/DVD player, satellite television. En-suite bathroom with Jacuzzi tub, shower, bidet and separate toilet. Walk in wardrobe.
The two guest doubles have queen size beds with en-suite bathroom with showers and bidet. They have TV/DVD and satellite TV's.
The twin cabin has a shower, TV/DVD and satellite TV.
(There is also a baby bed onboard)

Special Conditions:
5,000 Euros security deposit for static charters
During static events, Sunliner X can host up to 45 guests comfortably, but will accept up to 60/70 guests.
SUNLINER X has her own tent for the aft deck and flybridge to be used during static charters as well as 2 heaters
Pet friendly Owner Plus Expenses

Captain Benoit has gained experience as a captain on both sailing and motor charter yachts. He has extensively cruised the Mediterranean and the Caribbean. After spending 4 years on yachts such as Sirena A and the Leopard SKS, Benoit joined SUNLINER X in 2006. A family man, very good with children; he has a great sense of humour as well as a discrete personality and a professional eye. Benoit is also a qualified engineer. He is a real “can do” captain that will go out of his way to please guests and help them discover all the best spots.

Classically trained chef Nicolas left France for the US and spent the following 8years training and acquiring new skills in high-end French restaurants in New York City. In 2011 Nicolas relocated to Russia where he was the Executive Chef of the Kremlin. He spent 5 years in Moscow learning the language, food and culture. During this time Nicolas cooked for Vladimir Putin and his administration as well as being in charge of many official events including the Sochi Winter Olympics and the World Economic Forum in Davos. Following his return to France, Nicolas opened his own restaurant but it was after a summer season spent between a private villa and super yacht that Nicolas found his true passion and is now pursuing his dream on board M/Y Sunliner X. Nicolas’s favourite dishes stem from
modern French classics but with his Russian cuisine knowledge, and ability to cater to many different special diets and restrictions, Nicolas will craft a menu that will delight guests and their holiday on Sunliner X truly memorable."
Nicolas is also a trained and very passionate freediver and enjoys spear-hunting and Mediterranean fishing.

Yann has a long and very interesting marine experience. Yann entered the yachting industry in 2013 when he was looking for new experiences and new challenges. Prior to that, he was working on a 19m hydro jet surfer, 2 years as a Capitan in the offshore oil field in Angola and Congo and 2 seasons on 20 meters charter sailing catamaran. In addition to that for 7 years, Yann was Captain on Corsica cruise ship up to 20 meters. During this time, Yann has gathered a good general knowledge of the sea and the ocean. He is able to take fast decisions but prefers to predict situations to be prepared. Yann has a great rapport with his guests. Yann’s hobbies are windsurfing and electronic music.

For Mihaela, working onboard a superyacht was a once in a lifetime opportunity.
13 years ago and after completing her bachelor's degree in marketing and hotel management in Nice, she made it a reality and began what would quickly become a very successful career. Along with her exceptional language skills, Mihaela is an excellent chief stewardess because she is extremely knowledgeable, professional and discrete and pays great attention to detail. Mihaela’s philosophy with regards to the ultimate luxury experience on board is to be able to accommodate her guests’ wishes at all times. She always adapts her service to the guests expectations and not to the general yachting etiquette. In 2014 Mihaela won the « Special service award » at the Genova Yacht Show for her table setting and workflow with the galley department, which speaks for itself.
In her free time, Mihaela enjoys exploring languages and different cultures, traveling, outdoor sports, photography and fashion.

Spending much of her childhood on her father’s boat, Mathilde has always felt at home on the oceans. Organised, reliable and adaptable, Mathilde spent 6 years refining her exceptional service skills within the hospitality industry. When the opportunity to join the industry with an Atlantic crossing in 2014 arose, Mathilde gladly took it and has never looked back. Mathilde completed her STCW95 as well the Open Diver qualification. She loves to spoil her guests and is always on-hand
Mathildes’ love of the ocean drives her passion for sailing and diving and when on land she enjoys photography.

Although Thibaut joined the industry fairly recently, he immediately felt at ease and knew that this is a career he wanted to follow. He likes to take initiative and together with a strong sense of responsibility Thibaut is a great addition to the team. Thibaut always does his best to make the experience for the guests on SUNLINER X even better.
When not working, Thibaut enjoys wakeboarding, road cycling and football.