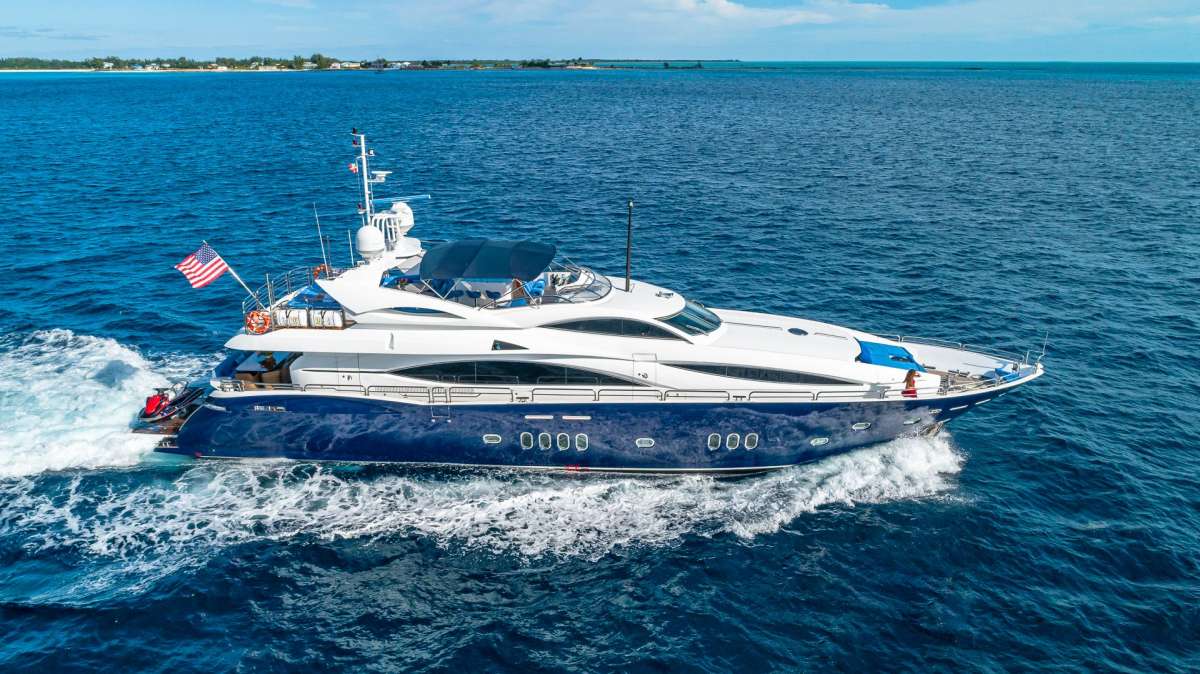 KEFI is a Sunseeker 105 yacht measuring 32 meters (105 Feet) in length, built by Sunseeker Yachts in 2004. She was the only Sunseeker 105 Yacht to be built to and achieve the MCA large yacht code within this award winning line. She is able to accommodate up to 8 charter guests in 4 well appointed cabins.

The yacht has been fitted to a very high standard throughout. Her streamlined design is sleek and sporty and she effortlessly combines style and sophistication with power and performance.

KEFI has a sophisticated and elegant décor, designed by Ken Freivokh, and finished in tones of cream and chocolate. Her interior features a spacious and open layout that provides warm and welcoming spaces for friends and family to gather. Her exterior deck spaces are equally as impressive, offering a variety of options for relaxing in the sun or shade.

KEFI accommodation are comprise of a master suite, 1 VIP stateroom, and 2 convertible twin/king cabins. This versatile design make it the perfect boat for couples or family! She is also capable of carrying up to 5 crew onboard in 3 cabins to ensure a relaxed luxury yacht experience.

Captain Name: Captain – Johann Faubel
Johann grew up on the sunny shores of Miami, Florida. After high school Johann enlisted in the U.S. Coast Guard. During his 4 year enlistment he served as an engineer aboard Coast Guard Cutters in Puerto Rico, the Caribbean and Virginia. After his term in the military he decided to make the transition into yachting and work his way up to Captain aboard yachts in South Florida. From the Gulf of Mexico to Connecticut, and the Exumas to the Virgin Islands Johann likely has a story to share if you’re interested, and wants you to know that KEFI’s comfortable bridge sofas are always available as a great place to converse while the world slides past. Johann holds a Master 500 ton license and has built the perfect crew for KEFI to provide Five Star service to it’s guests. His hobbies include fishing, overlanding, travelling and building project cars. When he isn’t onboard Johann can be found in Fort Lauderdale, Florida enjoying days off or travelling the world. Languages - Spanish, German

Chief Engineer - Alexis Aguilar
Born in the south coast of Cuba, from a family of 22 seafarers (Ship Pilots, Captains, Engineers and Commercial divers), Alex spent most of his childhood growing up between Cuba, Spain and South France. In 1986, he received his naval mechanic bachelor, and then moved on to be graduated in 1989 of Industrial Electrical Systems. After working in electricity production industry, he needed a change and missed the sea. Alex had transitioned to the merchant ship industry for a while in the engineering department. After, he transitioned to the Yachting industry.
His early influence for fishing and diving, had made him an avid fisherman and certified diver instructor PADI, SSI, CMAS**. When not working on KEFI, Alex is in Fort Lauderdale where he lives with his dog, wife and daughter, Thea. Languages - Spanish, Italian, French

Mate – Cynthia Sopata
Cynthia grew up the daughter of a U.S. Air Force family, relocating to a new adventure around the world every three years. After graduating College in North Caroling for Musical Theatre Performance, she worked on stage, backstage, on screen, in design, and even rock & roll concert production; traveling wherever the work took her. On the Great Lakes in the Windy City of Chicago, she discovered sailing and found her calling. She took every opportunity to be on the water: Sail boats, power boats, climbing aloft on the traditional sailing tall-ships (think ”Pirates of the Caribbean”), teaching adult able and disabled students, racing, charter Captain, trans-Atlantic trips, volunteer U.S. Coast Guard, and even National Geographic’s newest Pacific Northwest passenger cruise ships. A constant traveler: when on-land you can find Cynthia exploring bicycle trails, visiting family and global friends met along the way, curled up with a psychological suspense novel, or in the pool. Cynthia holds a U.S. Master 200 GRT and Mate 500 GRT License, as well as matching international certifications. She is Captain Johann’s right hand; and is delighted to provide you with a sparkling clean yacht, a fun and safe experience with KEFI’S variety of water toys, and a few salty sea stories as well.

Chief Stewardess – Kate Lohr
Kate has spent most of her life in the heartland of Virginia, historic Fredericksburg. Interested in the human mind, Kate continued her education in Lynchburg, Virginia studying psychology at the University of Lynchburg. In 2015, she graduated and moved back home to continue land-based careers in sales and hospitality. In 2018, after feeling unfulfilled on land, Kate make the leap into a more adventurous career of yachting. Coming from a Navy family and sailing as a child with her father, Kate knew hospitality at sea was her calling. Since beginning in the industry, Kate has worked on a variety of vessels ranging from 30m to 90m, absorbing and implementing everything she’s learned. She takes great pride in providing excellent service and creating a memorable experience for all. For Kate, the sea would be surely be enough; but traveling to new destinations and meeting interesting people seems to be the most enthralling part of yachting for her. She loves being active outdoors in any and every way, as it seems no adventure is off course. Just as often, you can also find her curled up under a cozy blanket with her cat and a great book. Kate enjoys being with her friends and family and values that time more than anything else. She is fully dedicated to making sure you have the most wonderful time on board with your guests and will surely help make memories to last a lifetime.

Chef - Jose Raúl Navarro
José Raul Navarro comes with 25 years of experience and a mastery of cooking and kitchen operations. After graduating the CIA (Culinary Institute of America) in New York in 1996 he travelled the world to learn from different cultures and cuisines. He has previous experience working in yachts as Head Chef and culinary strategist ensuring the best food preparation meeting the best hygiene standards with passion a creativity. He is also versed on the legal requirements related to public health, chemical safety and usage, fire procedures and safety, kitchen cleanliness and food care requirements. During his outstanding career he was awarded the young chef award at Ambrosia restaurant in Mexico City, the best cook recognition awarded by the French Alliance institutes and the best innovative cuisine in Seville, Spain, his restaurant appeared on the Repsol guide for the cities best restaurant. He looks forward to serving you with the most exquisite cuisine aboard Motor Yacht Kefi. Languages - Spanish and Italian