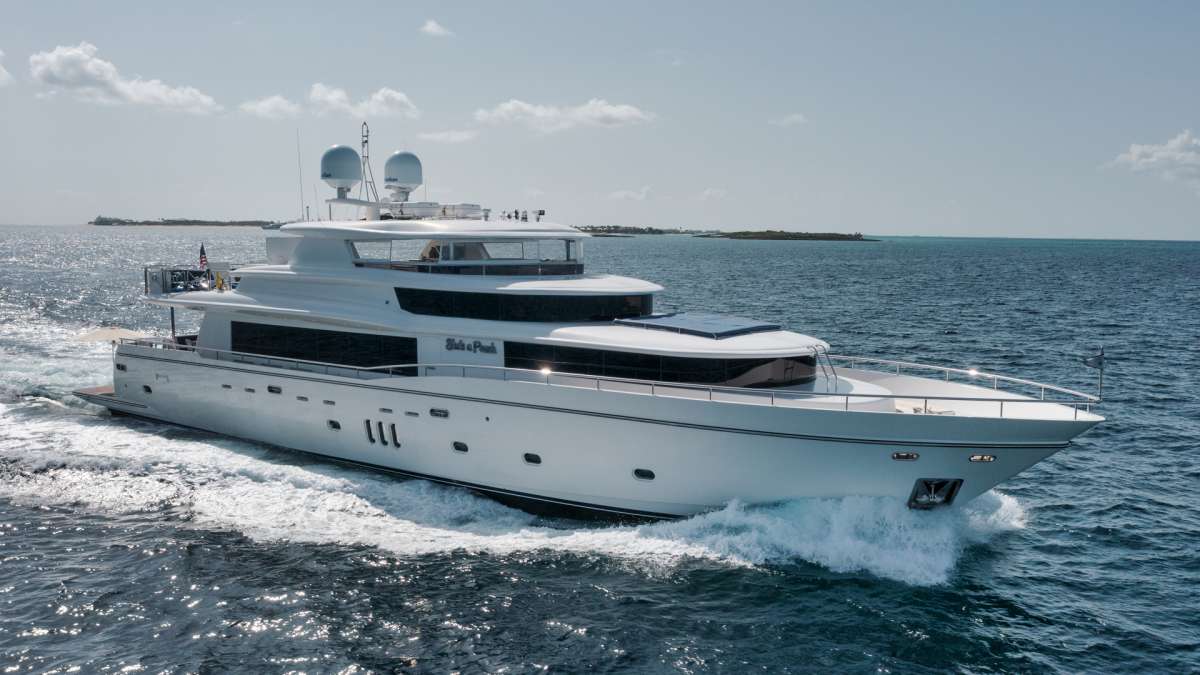 She's A Peach's interior layout sleeps up to 8 guests in 5 rooms, including a master suite, 1 VIP stateroom, 2 double cabins, and 1 twin cabin. She is also capable of carrying up to 4 crew onboard to ensure a relaxed luxury yacht experience.

Steve was born in Cape Town and left his home country of South Africa in 1998 to circumnavigate the globe on a 47-foot sailboat and race in different international regattas. Once Steve reached Hawaii by way of the Panama Canal the plans for the vessel changed and he made his way to Newport Rhode Island. This is where he fell in love with the world of motor yachts and sailing vessels and thus began his professional career in the marine industry. Steve eventually settled in Wrightsville Beach, North Carolina, and became a US Citizen in 2006. He owned a local Awning company and later worked as a traveling Maintenance Specialist Consultant in Canada, Wales, Australia, and the Philippines, but his heart always yearned to be back on the ocean. In 2010 he returned to the nautical industry and has been Captaining a variety of vessels. His experience has taken him throughout the East Coast of the US from Northern Maine to Southern Florida and the Keys. Steve has thoroughly enjoyed exploring the islands in The Bahamas, British, and US Virgin Islands as well as the Caribbean as far south as Trinidad. When Steve isn’t sailing the high seas you can find him partaking in all water sports including but not limited to freediving, scuba diving, surfing, and flight-boarding.

Adrienne was born and raised in a small town outside the capital city of Canada called Manotick. She has a Bachelors degree in Psychology with a minor in English literature. Adrienne has been traveling internationally from a young age and relocated to Australia after high school and lived there for four years. She gravitated to the hospitality industry at 18 and has since been managing high end bistros and wine bars all over the world. Adrienne moved to Honduras in 2016 to complete her Divemasters in scuba diving training and from there met a man who convinced her to move to Florida to begin her yachting career. She has worked as a chief stewardess and deckhand on a number of different boats. Her favourite places to cruise in the world are the Glacier National Parks of Alaska and anywhere in the South Pacific. What she loves most about her job is the versatility in her positions as well as the potential for knowledge expansion and education. When Adrienne isn’t working as crew on board yachts, she can be found skydiving, swimming, hiking, surfing, scuba diving, reading and traveling around the world. She can speak French and is a lover of all animals.

John was born in Boulder, Colorado and he spent his formative years in the mountains of Breckenridge, Colorado. He has an associates degree in computer networking. He has trained as an EMT and is a certified PADI Divemaster. John started working on small cruise ships and then moved to Honduras to complete his Divemaster training. He discovered yachting through a friend in Honduras & quickly realized his love for driving boats of all sizes. He has been working towards his captains license so that he can run large vessels. John has extensive experience working in the Caribbean, Bahamas, Florida as well as the North Eastern United States. His favourite port of call and cruising area is the British Virgin Islands. John loves yachting because it offers many challenges as well as rewards. He loves being outside, working hard and traveling to new places. John is an avid landscape photographer so you will always find him with his camera and drone in tow. He is passionate about being active and healthy so mountain biking, snowboarding and scuba diving are his go-to sports. He would rather be outside than anywhere else.

Bryan Bobinchuck - Chef
Bryan Bobinchuck was born in Fort Lauderdale, Fl, and raised on Hilton Head Island, SC. During high school, he worked under a prominent chef on Hilton Head. In 1999, Chef Bryan opened a restaurant. Catch 22 was consistently voted in the top 3 restaurants on Hilton Head Island.
When Chef Bryan is not inventing his own scratch recipes, you will find him on his bike or on the water.
He enjoys road and mountain biking as well as fishing, snorkeling, and free diving. You will find him looking for locally-grown ingredients at farmers markets or growing his own if he can find some space. You’ll watch and listen to him teaching adults and children about nature and indigenous flora, fauna, and animals. Chef Bryan has recently made a name for himself in the yachting community. His diverse skills and adaptability make it easy for him to work with all food preferences, tastes, and potential allergies.
Chef B has a positive demeanor, a happy smile and broad scope of knowledge.