South Dalmatia is the southernmost region in Croatia. It is best known for its magnificent port city, Dubrovnik. Protected by impressive fortifications, Dubrovnik was once a wealthy independent republic. Nowadays, it is a UNESCO World Heritage Site. It also starred as the film set for Game of Thrones.

Although it’s not as popular or well-known as Croatia’s northern coast, South Dalmatia is a fantastic vacation destination if want to escape from the hustle and bustle of the big city. It’s more laid back and quieter than other parts of the country, and there are tons of things to do in this beautiful coastal region.

South Dalmatia extends from Baćina Lakes through the Croatian South to Cavtat, Konavle, and Prevlaka. The region’s climate is mild and Mediterranean. The rugged coast is home to interesting coves with beautiful sandy or pebbly beaches. Sunsets here are unforgettable.

There is perhaps no more dramatic coastline in the country than Split’s south one, with some of the best pebble beaches in the Adriatic. Split also has a regular coastal bus service that makes it easy to explore all the highlights.

Split’s most dynamic area is the piazza (Split market). The Piazza displays the agricultural riches of Split’s hinterland. Here you will find a wide variety of Dalmatian and Mediterranean specialties to sample and purchase such as olive oil, wine, and cheese.

Dubrovnik is a fantastic starting point for a luxury yacht charter. From here, you can sail around the islands of South Dalmatia. Visit Mljet, home to the salt-water lakes and pine forests of Mljet National Park. and Korcula, famed as the producer of some of Dalmatia’s best white wines.

Formerly known as the Republic of Ragusa, the Republic of Dubrovnik was the most powerful maritime republic of its time. Later on, this seaport and city on Croatia’s Dalmatian Coast retained that power. More than a millennium later, it’s still one of Europe’s great cultural centers, an architectural treasure trove with centuries-old palaces and churches built around manicured gardens.

Wander its twisting streets and see historic landmarks like St. Blaise’s Church, which houses 18th-century paintings; St. Dominika Tower, which offers spectacular views of the sea; and Our Lady of Lourdes Cathedral (built between 1694 and 1702), where you can admire white marble sculptures by Venetian masters Tullio Lombardo and Alessandro Vittoria. Get a bird’s eye view from the bell tower (don’t forget your camera).

The National Park of Mljet Island is twenty-four miles southwest of Dubrovnik. It has two saltwater lakes, dense pine forests, and a Benedictine monastery on St. Mary’s Island in the center of the park. Legend says that the Greek hero Odysseus fell under the spell of the nymph Calypso and lived there for several years.

Opposite Korcula, the Peljesac peninsula produces Croatia’s best red wines. The narrow sea channel between Korcula and Peljesac is an amazing spot for windsurfing.

The Pelješac Peninsula has more than 350 square kilometers of lush green landscape that connects to the mainland with the newly constructed Pelješac bridge. Pelješac offers unforgettable landscapes as well as the best varieties of world-renowned wine from the traditional Dingač and Postup grapes. The southern slopes of the peninsula, east of Orebić, have the best growing conditions for the grape vineyards of Pelješac wines.

A small town on the Peljeac peninsula, Ston, is known for breeding mussels and making salt in traditional ways, similar to Nin near Zadar. Fresh and salty mussels are easily available in the area, along with exquisite wines and gastronomic delicacies.

Beaches on the Peljesac Peninsula

The Peninsula has many fantastic beaches.

One of the best is Prapratno Beach, southwest of Ston on the lower peninsula. It is a long, sandy beach surrounded by pine trees. The water is shallow here so it is good for families with young kids.

Trstenica Beach in Orebic has a sand/pebble mix. This beach is also good for families.

In the Trpanj region, visit Divna Beach. It is a small pebble beach surrounded by lush greenery. Shallow waters make it suitable for swimming and wading.

Travel to the green island of Korčula. This island is densely populated with more than 17,000 residents. There are daily ferries to Split, Dubrovnik, and other ports.

Korčula’s old center has a movie-like medieval setting that is rich with history. Its port and old walls greet yacht charter visitors as they dock at Korčula Marina. The city of Korula is known as the birthplace of the traveler Marco Polo.

Korčula locals say that even during the busy season, the sea is so clear and clean, that one can enjoy its benefits and have a swim under the old walls on a city beach, just after morning coffee. During the summer, you can see North African performances of Moreska, a traditional sword dance. 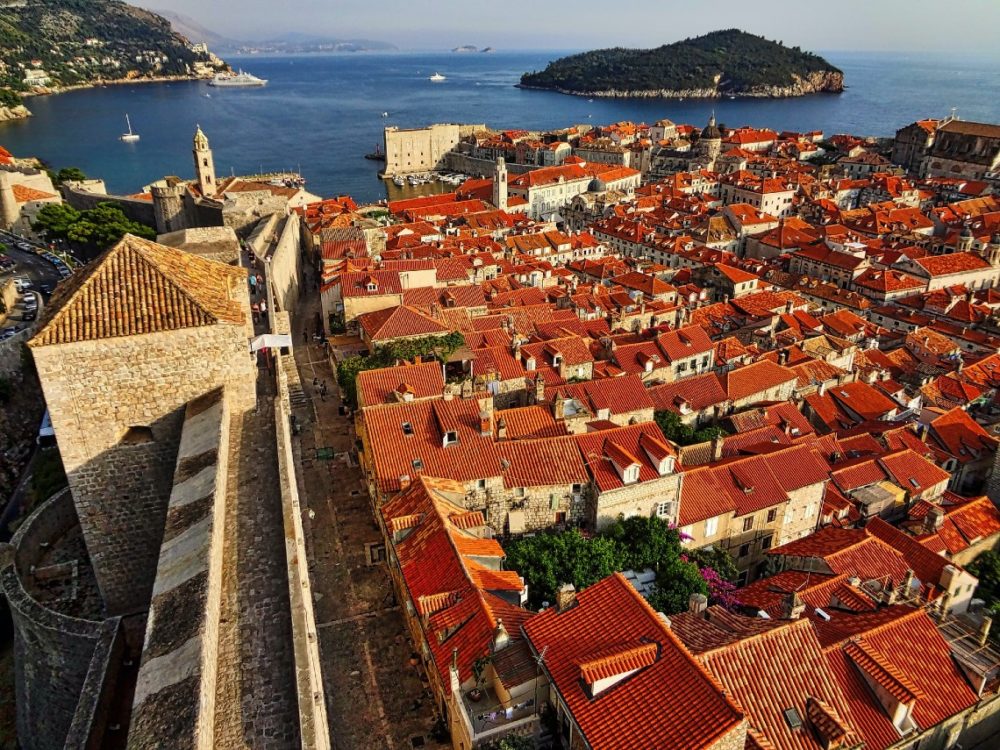 Dubrovnik, Croatia's best known and most glamorous tourist destination, lies in South Dalmatia on the Adriatic Sea. Formerly a wealthy... 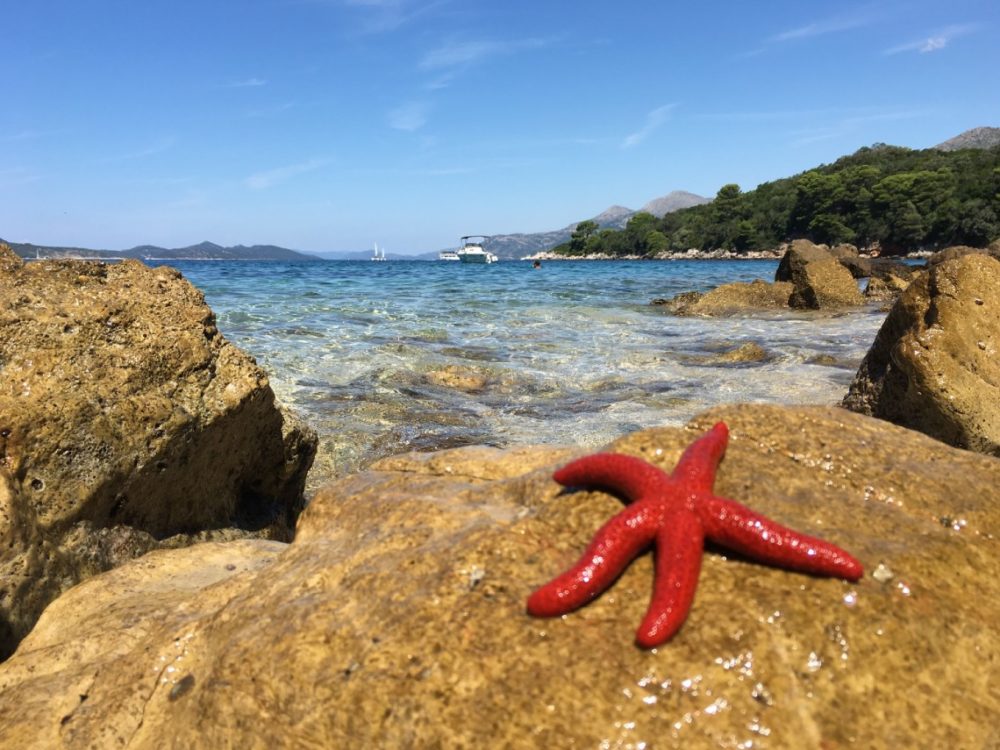 The green, rocky, car-free Elafiti Islands in South Dalmatia include a dozen islets, of which three are inhabited: Šipan, Lopud,... 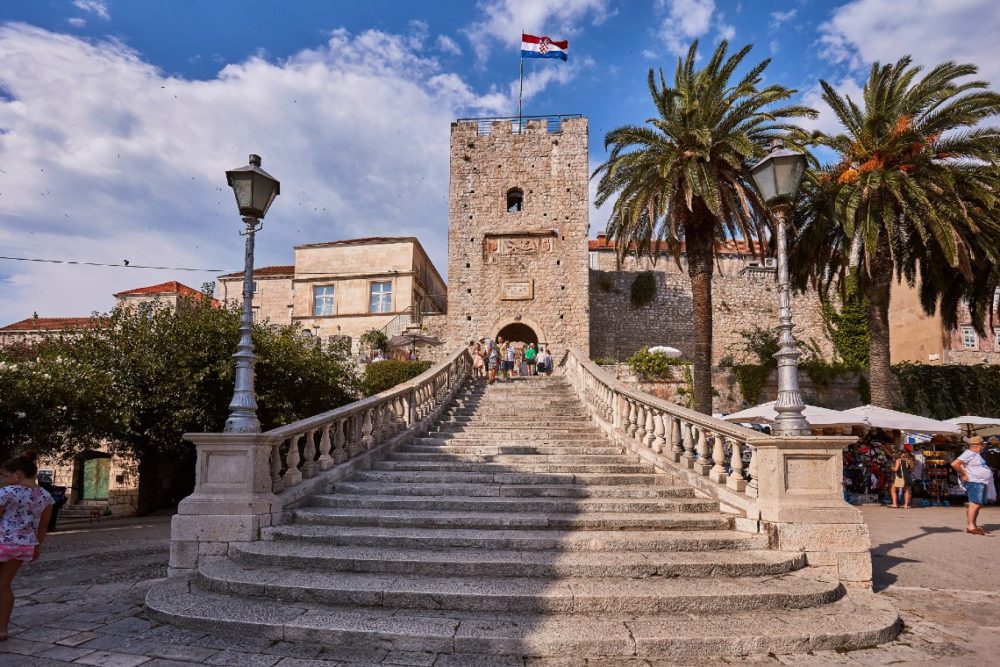 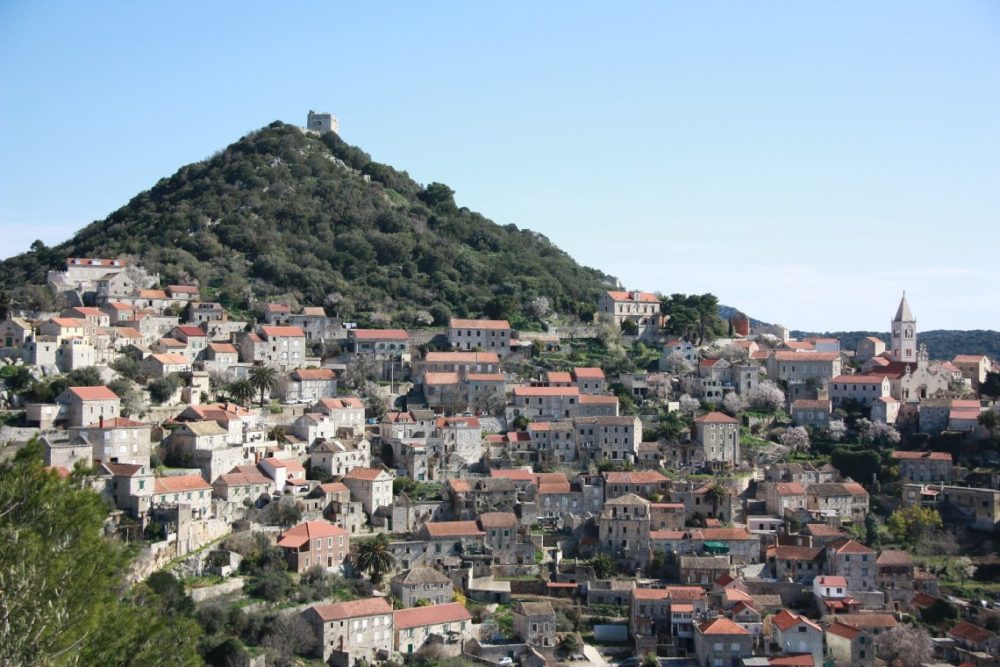 Lastovo is the most remote island in South Dalmatia. It is an excellent Croatia Yacht Charter destination for those who... 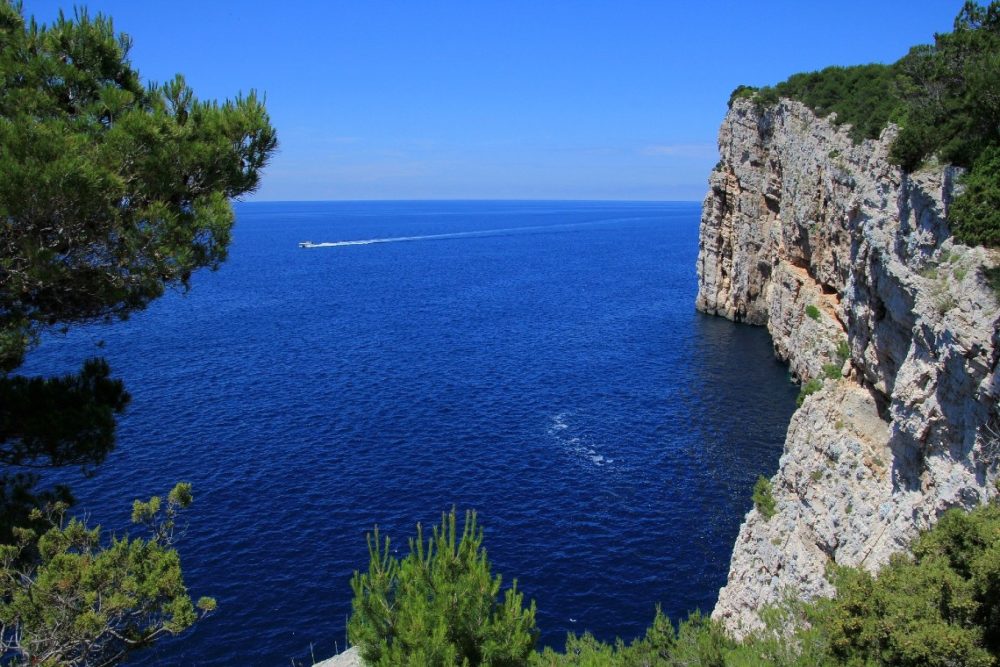 Mljet is an unspoiled green island in South Dalmatia in Croatia. Mljet National Park covers approximately one-third of the island.... 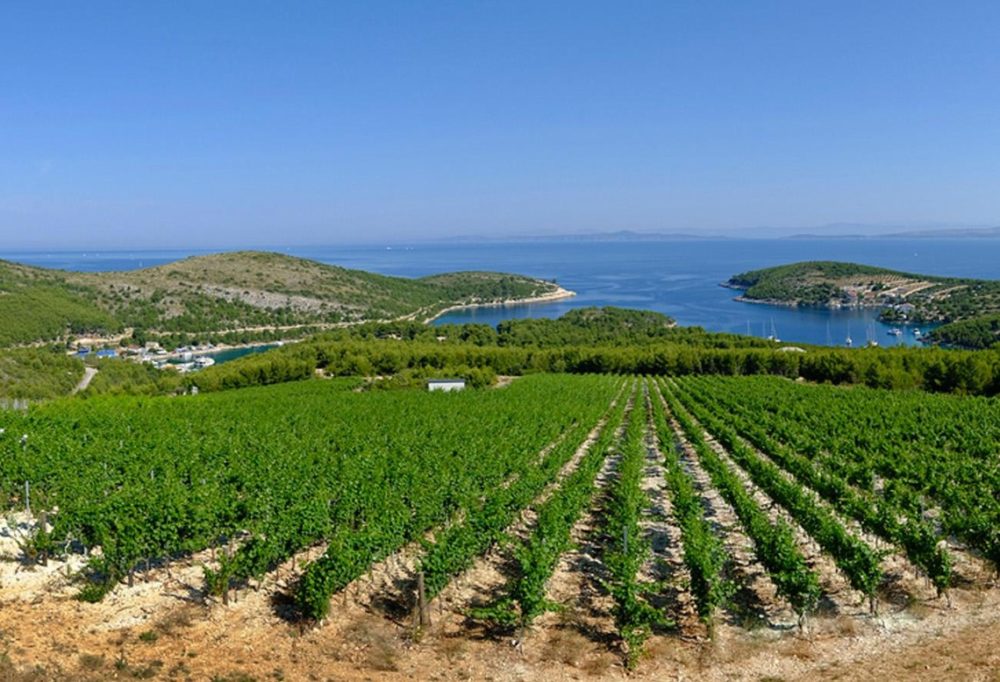 The Peljesac Peninsula in South Dalmatia is a 44-mile-long mountainous peninsula, known for its excellent local wines, quaint villages, and... 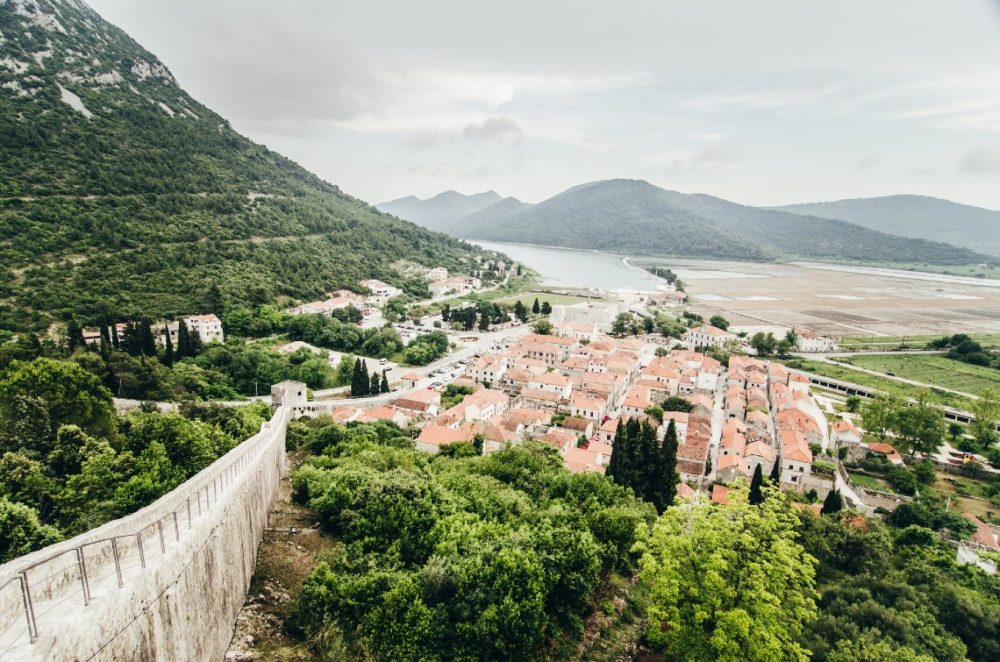 The tiny twin towns of Ston and Mali Ston lie at the very beginning of the Peljesac Peninsula. Medieval defensive...